Game development on Linux: Using Linux at every step of the process

Want to write games on Linux? I do! Here's how to hit the ground running.

This post is a (non-exhaustive) overview of the tools available on Linux, just to show that it is possible to use Linux at every step of the game development process. It's the first blog post of what will be a multi-part series on getting going with indie video game development on Linux.

Already into web development? Check out this article on making the conceptual jump.

Once upon a time, the words "Linux" and "games" rarely went together. Linux came in dead last as a viable gaming platform. Of course, over the last few years this has completely changed.

The same story could be told for game development on Linux -- while there have always been a litany of free software graphics engines, the modern indie dev scene tends to shy away from this more "DIY" approach and go for the "batteries-included" game engines. Well, the good news is these, too, are making their Linux debut, and so us Linux nerds now have a glut of options available for making games.

All software I suggest here is free software, and almost all should be available in your repo (e.g. Ubuntu Software Center) for free. I'll go over all the options, and the reasoning for the choices I made.

There are already tons of articles comparing the two most popular game engines available, both of which have native linux versions, so I won't waste your time with that. Instead, I'll quickly go over the reasons I didn't go with either, but instead went with the Godot Engine.

Versus this proprietary competition, the most obvious advantage is licensing: Godot costs nothing, and I own 100% whatever I make with it, no legalese-thinking required. Similarly, no vendor lock-in. I don't want my game-making business dependent on a corporation that can legally pull the rug out from under me, either through new licensing restrictions, closing off their editor from my platform, or just making controversial decisions and cutting off support for old features that I depend on. I may seem too severe, but I for one have been burned too many times to go down that route again.

Licensing aside, I also simply prefer its approach to scene structure, terse scripting language, light-weight distributable (30MB for the entire thing!), extensible C++ source code (so I will never encounter a brick-wall that can't be broken), and, well, free software ethos: as community-driven software, it keeps the "indie" in "indie game dev"! ;)

Godot has a different approach to scene structure

Linux has everything you need for 2D graphics for game development. These tools are useful for building everything from UI elements, painting assets in 2D games, or creating textures for 3D games.

Under Linux, there is really one way to go for 3D graphics, and fortunately it's a great way: Blender. Although dauntingly complex, it's one of the most popular 3D creation suites available, and integrates excellently with engines like Godot. Personally, I'm a noob at 3D modeling ("UV mapping, y u no work"), but I do know that Blender is pretty dang powerful in the right hands, being used for everything from 3D-animated movies, to level editing. The canonical use of Blender is for creating and texturing 3D models to be imported into your game engine.

If for whatever reason Blender isn't your thing (and you're willing to fork over quadruple digits of cash, yikes), the old industry standard of Maya also has a native Linux version, as does Modo.

Despite its out-dated interface, Audacity remains a solid option for recording and editing little sound effects. This has built-in OGG and WAV support, and so it plays very nicely with Godot.

If you haven't looked into this in a while, you might be surprised at how far Linux audio has gotten. If you are intending to write your own music for your game, you can do quite well with Linux. 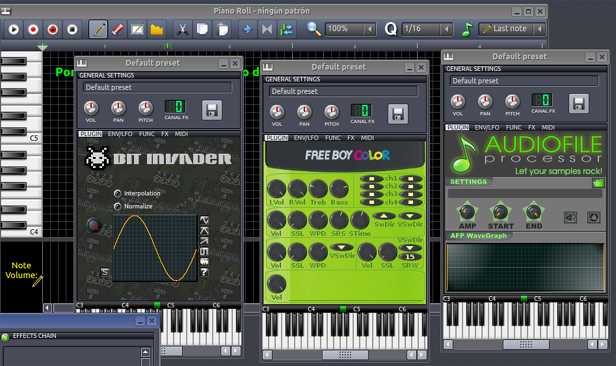 It's worth mentioning that a few popular proprietary DAW's have native Linux support also, such as BitWig studio.

For Linux audio, I highly recommend getting this software (and a lot more goodies) via the KXStudio repos. These guys are awesome, they've put together a bigger and more recent selection of audio software than most standard repos. I also recommend that you consider the approach of having a dedicated partition just for music production. If you want to get set up with this, check out my other article: getting started with music production on Linux.

Perhaps for the first time, top-notch tools for authoring everything from game code to graphics to sound on Linux are here! Although I'm new to full-time game development, I have been working on game and audio projects (both on Linux and Windows) for 15+ years now, and today the offerings have never been better.

Do you write games on Linux, or are considering it? Do you prefer other tools? I'd love to hear in the comments!

Solo Game Dev Kanban Magic: I used to struggle with self-management, but my most recent technique seems to be working really well

Over the last month I've been experimenting with an "agile" time-management method for my solo-game dev work. The verdict?…

Michael Bethencourt (@mbgamedev) is a developer based in the SF Bay Area. He blogs about indie game development on his OS of choice, Linux.

I founded a cutting-edge coding academy. If you live in the San Francisco Bay Area, you can learn to code full-stack web development in Python and React.js, by taking one of my affordable, intensive courses.

Want to keep up with my tutorials, code snippets, and random musings on Linux game development? I post 2-4 times per month, so subscribe to catch 'em all!