In this post I will describe my my process to port JSC3D, an unmaintained 3D library that uses the browser's <canvas> 2D context, to run entirely in node.js. This allows a quite fast, easy-to-use CLI-based 3D model renderer. It looks quite good, without the need for GPU, making it easy to run on the server to generate previews of STL and OBJ files. Also importantly, unlike many other 3D renderers, this one can produce the same results in the browser.

Hopefully this article will be useful to others considering porting graphical browser scripts to node.js!

Running the command below produces the render to the right.

Try it out for yourself: 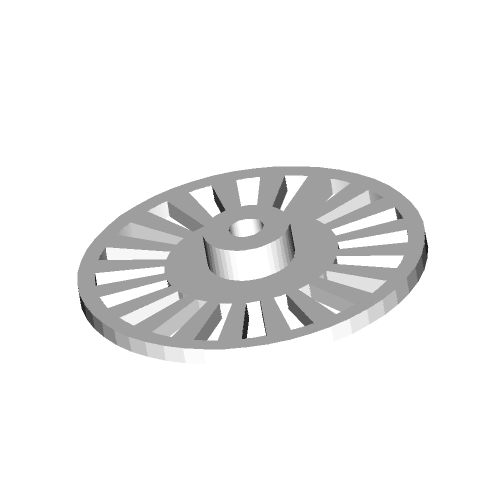 Step 1: Creating a sandbox that simulates a browser environment

I had a couple options at this point: I could dive into editing JSC3D to remove these references and change them to node.js referneces, or I could punt on that and just focus on getting a proof-of-concept running without modification by creating a sandbox environment for the script that simulates a browser. I went with the latter, using node's awesome built-in VM module. This was probably a good choice for JSC3D since everything came together pretty quickly, and I was soon able to get successful 3D renders.

How to use VM to sandbox a browser script

The simplest code to wrap a legacy browser script is like this:

An empty sandbox context is not enough, however, if it expects functionality from document and window objects.

Trial-and-error mocking of window and document

I first took a look at the JSC3D source, and Ctrl+F'd (/'d to be precise, 'cause vim) for the usual suspects: window and document. I was checking if it expected too much functionality from these, in which case I might be better off using a heavier weight solution like PhantomJS which will run it in a true browser. However, to my delight it only expected these objects to be populated with a few functions, and those were only used really for some debugging and interactive features that I did not need.

It was easy to stub out all that was necessary:

JSC3D uses XMLHttpRequest to request data from URLs. Since I was porting to node.js, I wanted it instead to read data from the local filesystem. This too turned out to be pretty easy to mock:

Finally, I need JSC3D to render to node-canvas instead of a real <canvas> tag, which is an in-memory canvas implementation that leverages C++ bindings to the libcairo 2D graphics system package. This was really easy... the only hiccup being I had to monkey-patch in a dummy addEventListener stub:

At this point, everything worked, and it was successfully running renders on JSC3D.

To improve performance, I stubbed out a couple other things:

And of course, pull requests are welcome!

As I was configuring my new system (using dotfiles configuration app I wrote for this purpose: stowage), I was…

Michael Bethencourt (@mbgamedev) is a developer based in the SF Bay Area. He blogs about indie game development on his OS of choice, Linux.

I founded a cutting-edge coding academy. If you live in the San Francisco Bay Area, you can learn to code full-stack web development in Python and React.js, by taking one of my affordable, intensive courses.

Want to keep up with my tutorials, code snippets, and random musings on Linux game development? I post 2-4 times per month, so subscribe to catch 'em all!